The compact, lightweight FLIR Scout II thermal handheld camera gives you clear, crisp thermal imagery from dawn to dusk and through the dead of night. If you can’t bear to miss a thing while exploring the great outdoors, the Scout II is your ticket to experience the night as never before.

See at Night in ANY Terrain
Scout II detects heat signatures of people, animals, and terrain up to 550 yards away, depending on model. The bright 640 x 480 pixel LCD screen displays the crisp and clear thermal imagery LCD screen in total darkness, with better scene contrast than I2 night vision.

Grab and Go Simplicity
Scout II starts up in seconds, requiring no training. Its menu is easy to use (Power, Polarity, Zoom, and LCD Brightness) and features either Freeze Frame (240 model) or 2X e-zoom (320 model). Scout II also offers a choice of detection palettes (White Hot, Black Hot, and InstAlert™) and a utility light for visual assitance at night.

Compact and Rugged
Scout II fits easily in the palm of your hand or in any pack. Its rugged, weather-tight shell weighs only 12 ounces, but withstands hard drops and shallow water.

What’s in the Box 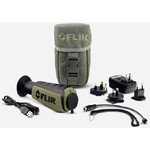 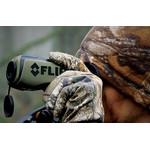 This thermal imaging camera should join you on every hunt.