CGX-L mount – the L stands for Large, because the CGX-L is the big sister of the Celestron Mount CGX GoTo.

The load capacity has been increased from 25 kilograms to 34 kilograms as compared to the CGX. This means that the CGX-L can also carry the largest Celestron OTAs plus photographic accessories. A key role is played by the generously dimensioned 144mm worm gears, which allow smoother operation even with heavier telescopes, as well as the 270mm extended dovetail clamp, which holds even the larger telescopes securely.

Despite the higher load capacity, the CGX-L is an easy to transport mount for portable use. It comes with an excellent tripod for this purpose.

However, the CGX-L is also very well suited for smaller observatories and remote operation. You get a really versatile mount with the CGX-L!

Advantages of the CGX-L in a nutshell

Please also read the product description of its little sister – the CGX mount. Apart from the above improvements, the CGX-L has the same technical features:

For eight years, Celestron’s workhorse CGEM mount lineup has been the German Equatorial backbone for telescopes ranging from 6 to 11 inches of aperture. Since that time, many more astro-imagers and planetarium controlled setups have emerged as backyard telescope technology has evolved. Celestron’s engineering team applied their years of experience designing German Equatorial mounts to the all-new CGX EQ, a culmination of all the advancements made to our technologies, value, and ease-of-use.

The new CGX was designed to better support your telescope for both visual and astro-imaging pursuits. Key design goals included a lower profile EQ head, which provides a more compact and therefore more stable setup; a better drive system; remote operation-friendly with home and limit optical sensors; easier polar alignment adjustments; and better cable management. In addition to that, we’ve made mechanical and ergonomic improvements throughout to make the mount sturdier, easier to use, and transport. The CGX is our new Equatorial backbone to support a wide range of telescopes.

PWI Telescope Control opens up the full precision of these mounts. A USB connection from the mount to your PC means the Sky Viewer display makes it easy to find targets. Or you can search for your targets in the extensive object database. PWI also has a connection to the SIMBAD astronomical online database for even more astronomical objects.

The software runs on Windows 7, 8 and 10. You can download it via the Downloads tab. You will also find an English-language manual in PDF format available there. 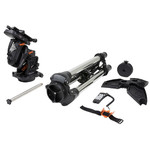 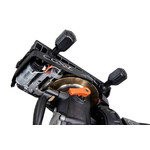 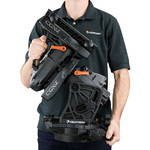 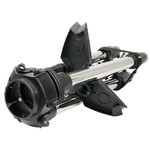 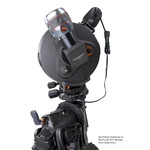