The Celestron Firstscope is an official product from the International Year of Astronomy 2009, and is ideal for a fun introduction to astronomy.

The Celestron Special Product for the International Year of Astronomy 2009:

In 1609, the Italian scientist Galileo Galilei first turned a telescope to the night sky and opened the door to exploring the wonders of the heavens. This fascination has continued to keep humanity under its spell for the last 400 years. UNESCO has declared this anniversary the ‘International Year of Astronomy 2009‘. Celestron can now offer you the official telescope for this occasion, the FirstScope 76, which is more than able to provide anyone with their first personal impression of the wonders of the universe!

A high-quality Newtonian telescope at an incredibly low price:

The Celestron FirstScope is a Newtonian reflecting telescope of Dobsonian design. A reflecting telescope collects the light from celestial objects via a combination of specially curved mirrors and guides it into an eyepiece, where it is then further magnified. The large 76mm diameter of the main mirror of the FirstScope enables enough light to be collected for even observing some of the fainter objects in the night sky, such as galaxies and gas nebulae. The focal length is the distance traversed by the light within the telescope’s optical tube as it is reflected by the mirrors. Despite its compact design, the Celestron FirstScope 76 has an impressive 300mm focal length.

Get started right away with the included accessories

A mount for anyone to use

The Celestron FirstScope 76 has a stable Dobsonian table top mount with clutches on both axes, allowing easy and very accurate pointing of the telescope. With an incredibly affordable price, a two-year warranty and recognition as a worldwide ‘official product’ for the International Year of Astronomy, Celestron´s stylish and powerful FirstScope 76 is your key to successfully exploring the skies above us!

Celebrate with astronomy lovers all over the world and secure this unique souvenir:

If you look at the Celestron 76 FirstScope you will see that it was appointed as the ‘Official Product’ of the Year of Astronomy by the ‘International Astronomical Union’ committee. It is a wonderful decorative keepsake for everyone involved in astronomy.

As the name implies, the ‘FirstScope’ is ideal for anyone who would like to point a telescope at the night sky for the first time. It is extremely easy to observe with! Simply move the optical tube by hand in the direction of celestial object you would like to observe, so navigating the FirstScope across the sky. The detailed user manual helps everyone to quickly begin successful observing.

You can now immerse yourself in the fascinating universe

The telescope’s ease of use should not hide the fact that you have acquired a powerful optical instrument with the FirstScope 76. The optics are of high quality and are mounted on a stable base making the telescope ideal for magnified observing of the Moon, planets and terrestrial objects. It can even show the brightest galaxies and gas clouds far out into the universe. The eyepieces included allow magnifications of 15X and 75X. Due to the low weight of less than 2kg, the Celestron FirstScope 76 is also an ideal companion when travelling. Whether you are camping in the wilderness or relaxing under the stars in your own garden – the FirstScope can always be near at hand as it is so easy to transport, erect and stow away. You can use the Celestron FirstScope for starting on a fascinating journey across the night sky with your family. The craters of the Moon, the rings of Saturn, the moons of Jupiter, the Andromeda Galaxy – the FirstScope can crisply and clearly show you all these remote objects.

The advantages in a nutshell:

It is not only important which telescope you buy, but also where you buy it. 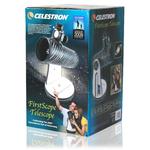 The telescope comes fully pre-assembled in an attractive gift box. 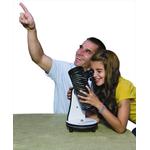 Ideal for getting started in astronomy, for all ages 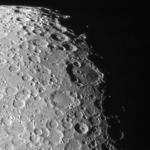 The moon with high-contrast craters 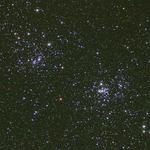 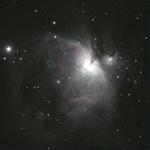 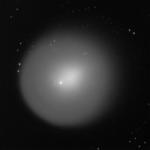 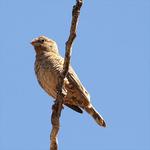